In order to assist in debugging failing test (especially when running them on remote machines without access to a debugger), it can often be helpful to add diagnostic output that is separate from passing or failing test results. xUnit.net offers two such methods for adding output, depending on what kind of code you're trying to diagnose.

If you used xUnit.net 1.x, you may have previously been writing output to Console, Debug, or Trace. When xUnit.net v2 shipped with parallelization turned on by default, this output capture mechanism was no longer appropriate; it is impossible to know which of the many tests that could be running in parallel were responsible for writing to those shared resources. Users who are porting code from v1.x to v2.x should use one of the two new methods instead.

Unit tests have access to a special interface which replaces previous usage of Console and similar mechanisms: ITestOutputHelper. In order to take advantage of this, just add a constructor argument for this interface, and stash it so you can use it in the unit test.

As you can see in the example above, the WriteLine function on ITestOutputHelper supports formatting arguments, just as you were used to with Console.

In addition to being able to write to the output system during the unit test, you can also write to it during the constructor (and during your implementation of IDisposable.Dispose, if you choose to have one). This test output will be wrapped up into the XML output, and most test runners will surface the output for you as well. 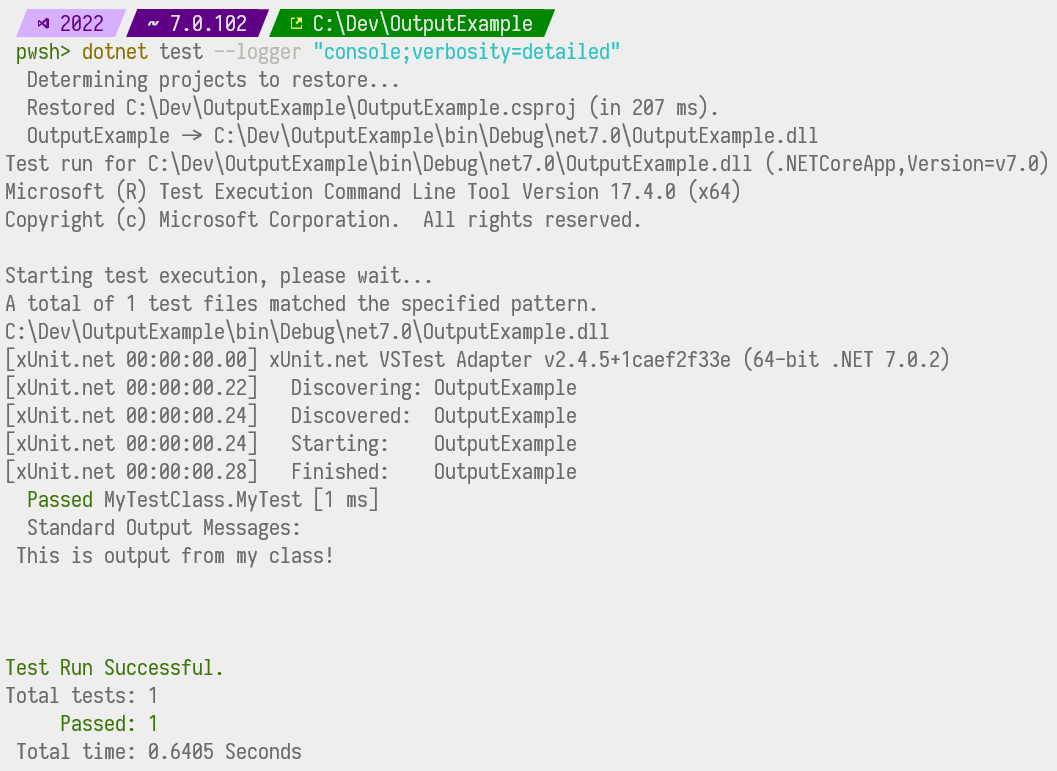 Output for unit tests are grouped and displayed with the specific unit test. Output from extensibility classes, on the other hand, is considered diagnostic information. Most runners require you to enable diagnostic output either explicitly with a command line option, or implicitly on an assembly-by-assembly basis by using configuration files.

Each extensibility class has its own individual constructor requirements. In addition, they can take as their last constructor parameter an instance of IMessageSink that is designated solely for sending diagnostic messages. Diagnostic messages implement IDiagnosticMessage from xunit.abstractions. If you're linked against xunit.execution, there is a DiagnosticMessage class in the Xunit.Sdk namespace available for your use.

The extensibility interfaces which currently support this functionality are:

Here is an example of using it in a test case orderer:

To see this output, open the Output window in Visual Studio (from the main menu: View > Output), and in the "Show output from" drop down, select "Tests".