In this article, we will demonstrate getting started with xUnit.net, showing you how to write and run your first set of unit tests. 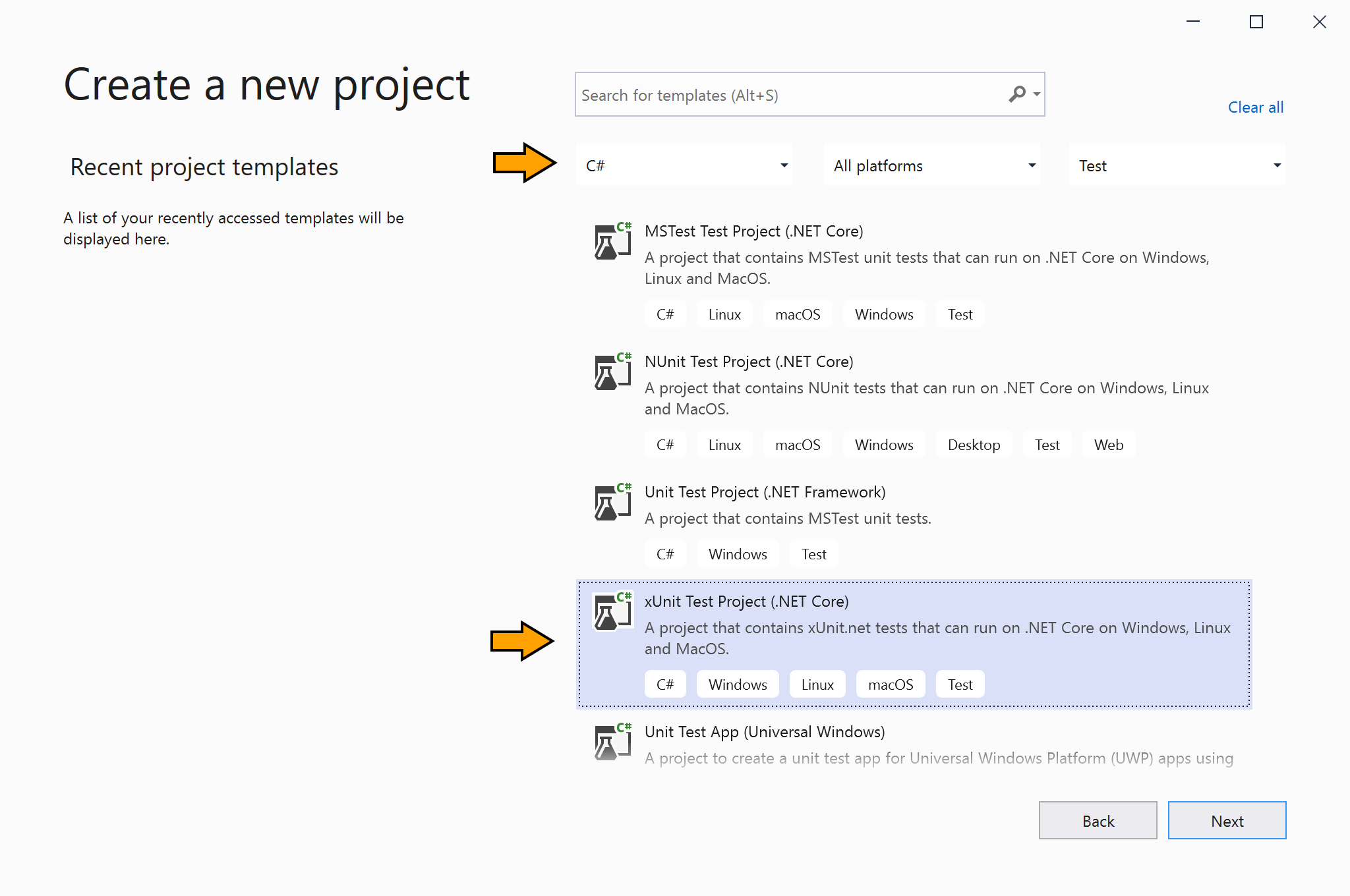 In the drop down boxes, choose your language (C#), your platform (All platforms), and your project type (Test). Scroll through the list if necessary until you find the item titled "xUnit Test Project (.NET Core)". Select it, then click "Next".

This leads you to the second part of the new project wizard: 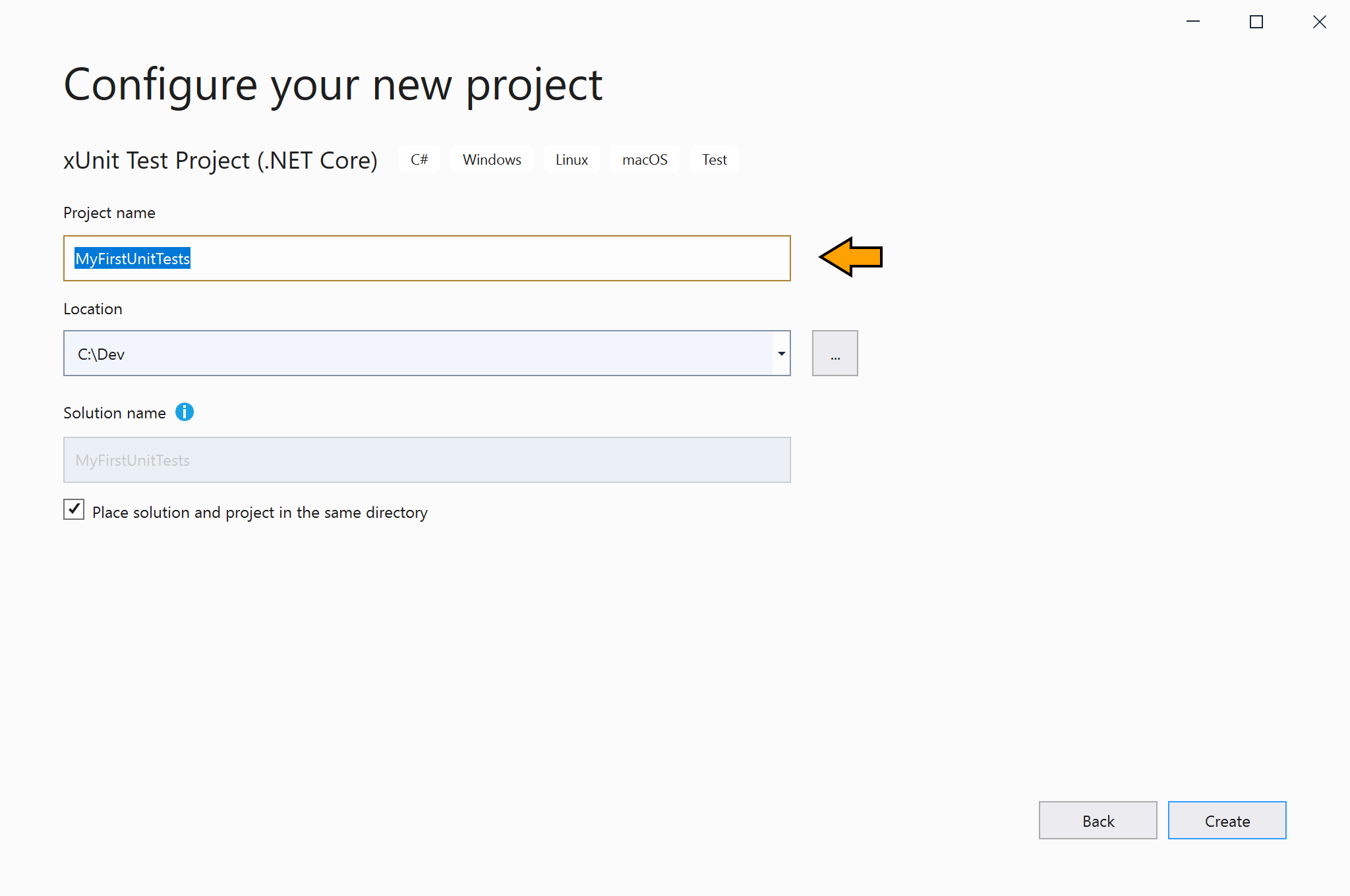 After a moment, Visual Studio will launch with your newly created project.

Find the project in the Solution Explorer (it will be titled "MyFirstUnitTests"), right click it, then click "Edit Project File". This will launch the text editor for your project file. It should look something like this:

A single empty unit test was also generated into UnitTest1.cs:

Let's make sure everything builds. Choose Build > Build Solution from the main menu. Your project should build without issue, as shown in the output window:

Learning to use Test Explorer

Test Explorer is the name of the window that lets you browse and run your tests from within Visual Studio. Open it by choosing Test > Test Explorer from the main menu. You should be greeted with a window that contains a hierarchy of the tests in your project, which should look something like this:

The toolbar of Test Explorer has buttons in several groups:

The main window of Test Explorer is split into two panes:

Click the left-most button on the Test Explorer toolbar (it looks like a double green arrow, titled "Run All Tests In View". This will run the single empty test, and the result should be success:

Now that we've ensured everything is working, it's time to write our first real tests.

Edit UnitTest1.cs and replace the default file contents with this:

We purposefully wrote both a passing and failing test, and we can see that the results reflect that. By clicking on the failed test, we can see a link both to the top of the unit test (at line 14), but also the failure message (we expected 5 but got 4) as well as a link to the exact line where the failure occurred (line 16).

When you edit the source file, also take note of the fact that CodeLens decorations show up which indicate not only test status (passed/failed) on the test themselves, but also on functions that are called by the code, indicating how often the code is called in tests, and a count of which of those tests have passed or failed: 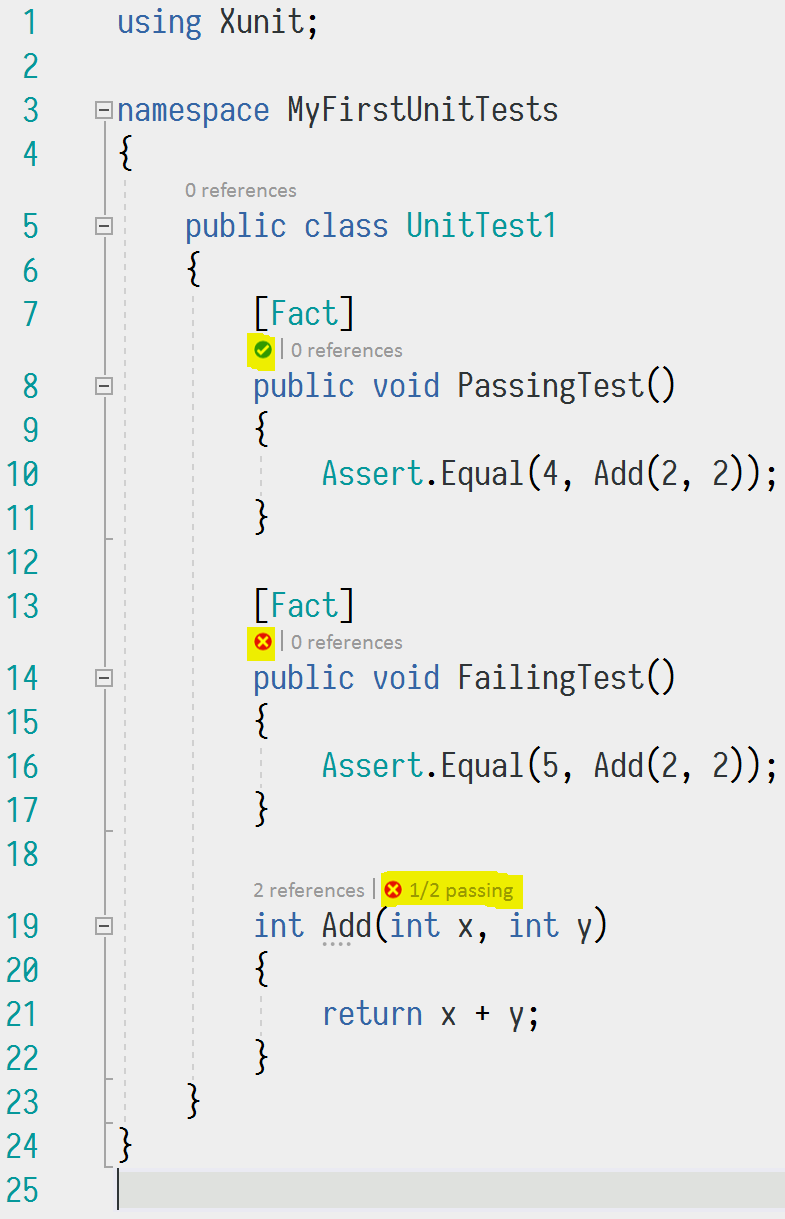 A good example of this is testing numeric algorithms. Let's say you want to test an algorithm which determines whether a number is odd or not. If you're writing the positive-side tests (odd numbers), then feeding even numbers into the test would cause it fail, and not because the test or algorithm is wrong.

This time when we run our tests, we see a second failure, for our theory that was given 6:

Although we've only written 3 test methods, the test runner actually ran 5 tests; that's because each theory with its data set is a separate test. Note also that the runner tells you exactly which set of data failed, because it includes the parameter values in the name of the test. The Test Explorer UI even shows a new level in the tree, as each row of data becomes a test result underneath its test method.

Sometimes, you want to write tests and ensure they run against several target application platforms. The xUnit.net test runner that we've been using supports .NET Core 1.0 or later, .NET 5.0 or later, and .NET Framework 4.5.2 or later. With a single test project, we can have our tests run against multiple target frameworks. Open the .csproj file and make the following change.

When you change a project file from TargetFramework to TargetFrameworks (or back), Visual Studio might show you a yellow "alert bar" which indicates that you have to reload the project for your changes to take effect. It's best to make this kind of change from a clean environment with no dirty text editors, to prevent the possibility of losing any changes.

The Test Explorer tree view will now show your test project multiple times, once for each target framework. You can run individual tests from individual frameworks, or you can simply run all tests for all frameworks.